I have not been updating this blog nearly as often as I should. This will change in the next two or three weeks hopefuly. It is in no way due to lack of material, precisely the opposite as I have hundreds of images still to file let alone scan. A flat move and work, amongst other demands on time have precluded updates.

Meanwhile here are a couple of vintage views to whet the appetite for further postings. Both are images from 1938. One showing Whitby before the tourist invasion of the post war years and the other a model village that is unidentified. If anyone can help with a location I would be grateful. 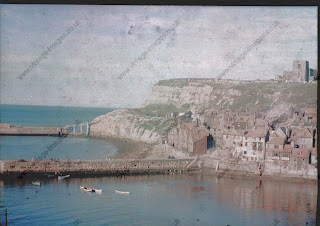 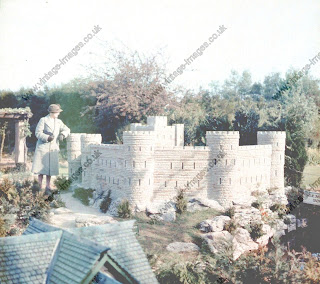 At the Bottom of the Column, London 1926 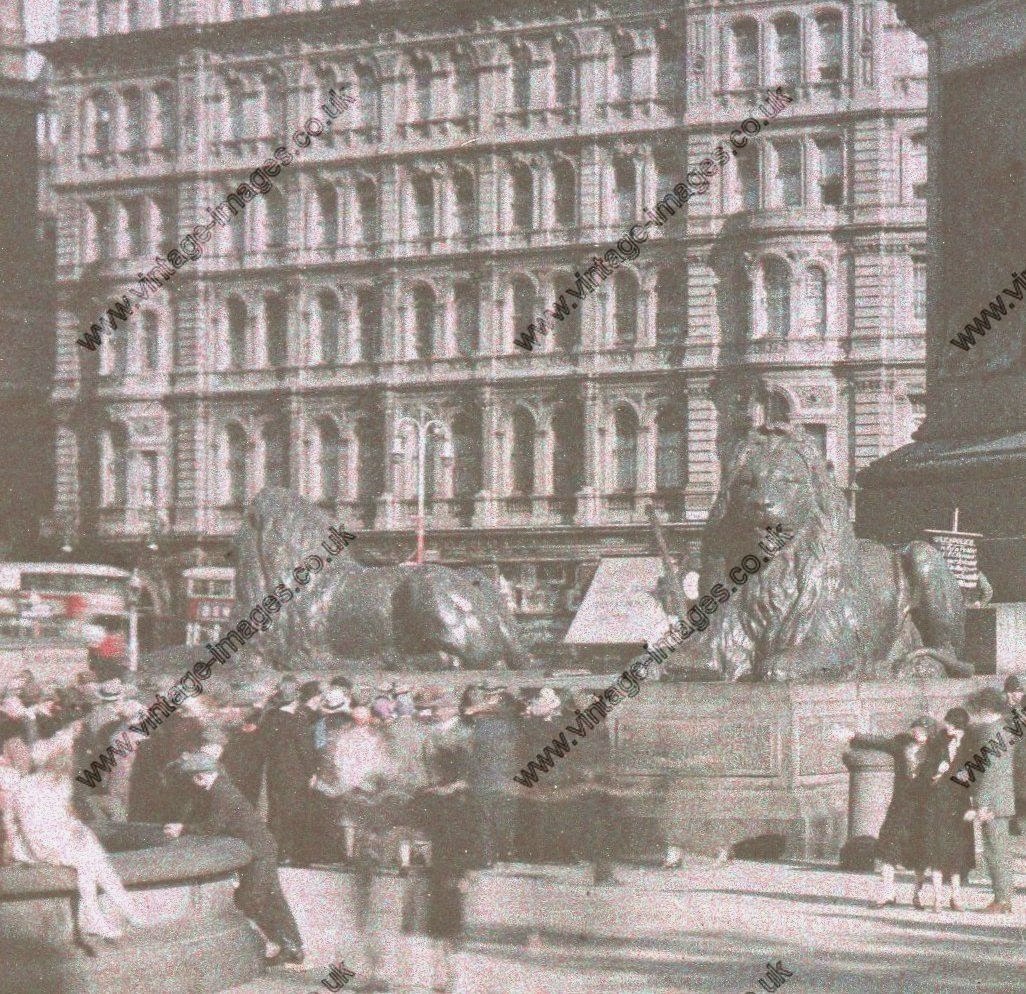 Trafalgar Square in August 1926. A rare Autochrome PLate of London in 1926. This has been cropped from a damaged original as Autochromes are fragile and susceptible to fungal damage. This one had extensive fungal damage which is irreversible. This is one of the earliest colour photographs of London and is part of an extensive collection of Autochromes tthat came to light in 2013.

In this image we are looking towards the corner of Northumberland Avenue and the Strand. Two buses are seen in the background. This scene has not changed much in nearly ninety years since it was taken. The lions still stand sentinel at the foot of Nelsons Column and people still gather and use it as a meeting place.

The Lions are seen in more detail in the lower image on what looks like a bitter winters day in the early 1950s. 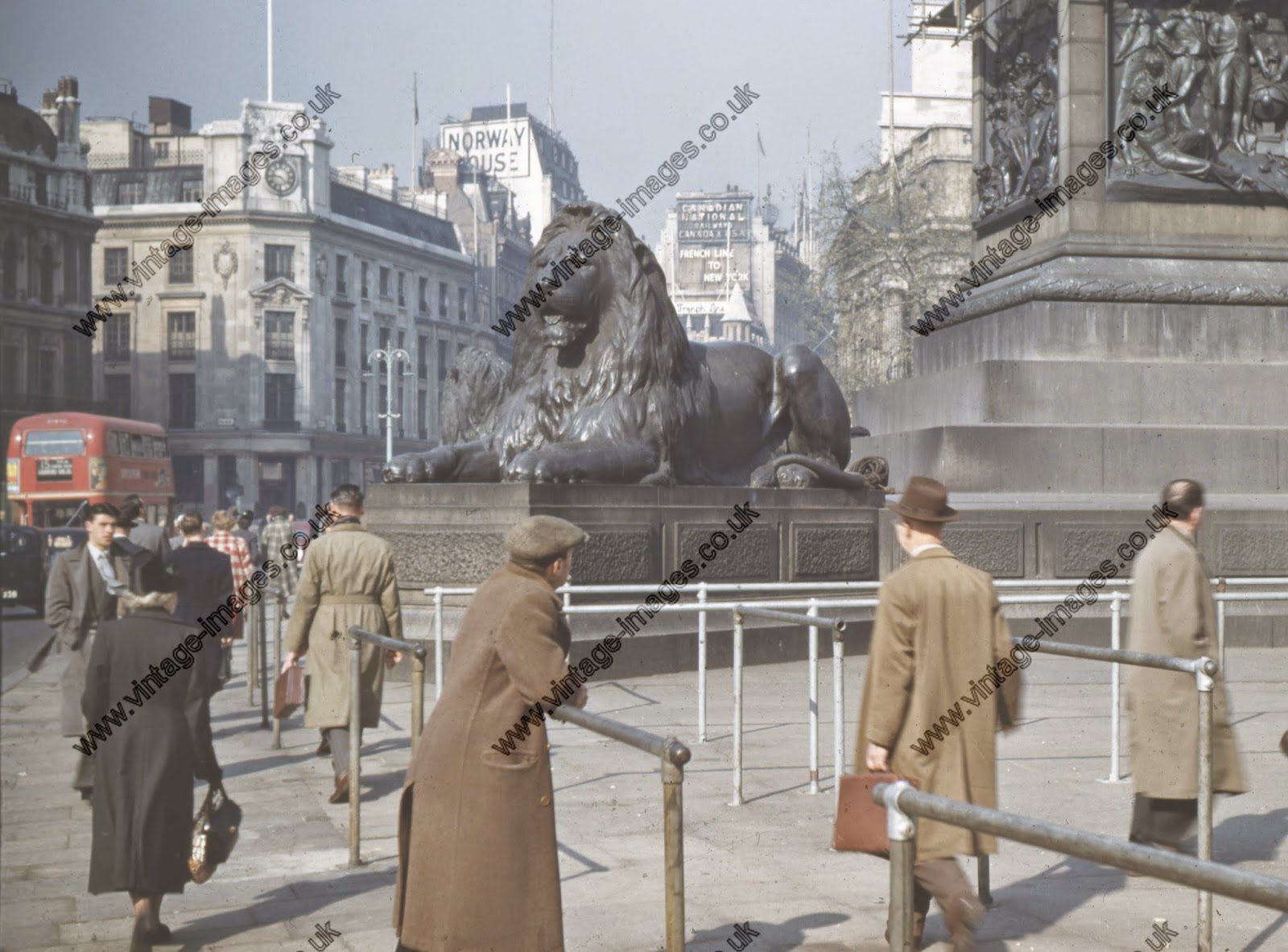 From Southampton to the four Corners of the World in 1963 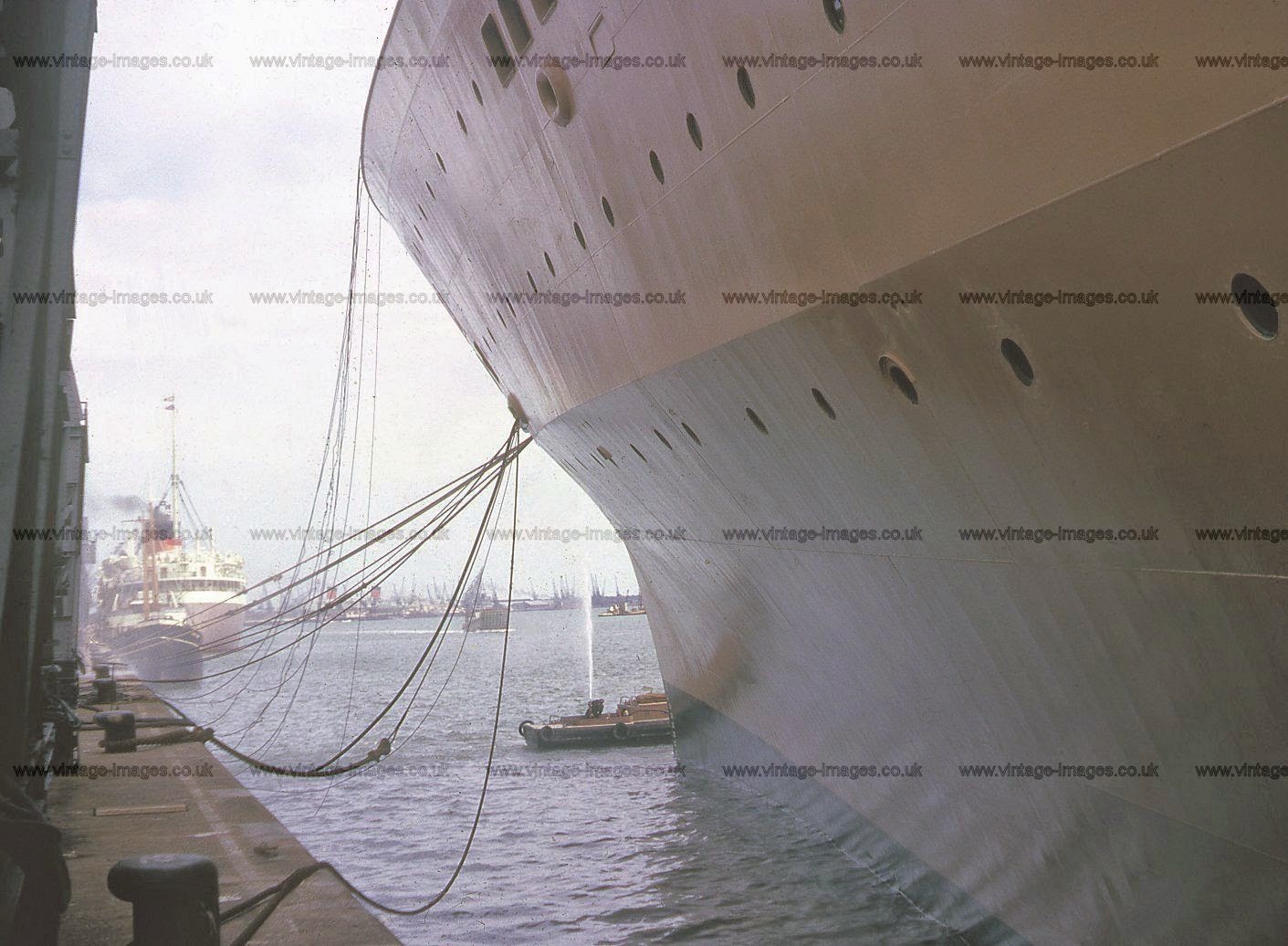 Southampton Docks in May 1963. Liners still cover the globe with regular Transatlantic cossings by Cunard, Union Castle liners sailing to South Africa and the Orient Steam Navigation Company to Australia. The latter two lines are seen here. The huge bulk of the 1959 built SS Oriana looms in the foreground with an unidentified Union Castle ship with its lilac coloured hull sits ahead. The funnels of what may be the Queen Elizabeth can be seen in the distance.

Union Castle Line would soldier on until 1977 on the South African run, the Australian route of the Orient Steam Navigation Co. having ceased in 1974. Cunard had stopped regular Transatlantic crossings in the late 1960s with the withdrawal in 1967 of the Queen Mary and the Queen Elizabeth in 1968. The QE2 would still make the crossing, but the regular weekly sailings would be a thing of the past. Air travel making the travel across the globe quicker, although not nearly as comfortable.

All this was a few years away but with the demise of long distance travel by ship purely for travel needs, the ships were converted for cruising as the shipping lines still had to make their ships pay their way (and ships are very expensive things to run). Cruising is now the main reason for travel by sea now, although for those that cannot travel by air, Cunard still does run a liner from Southampton to New York on a semi-regular basis, the Queen Mary 2 is the last liner built for North Atlantic conditions - and I can testify it is really the ONLY way to cross the Atlantic.
Posted by GavinW at 08:06 No comments: 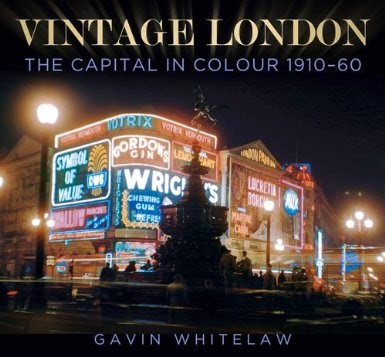 The past is almost always seen in black and white. It is not always appreciated that colour photography has existed for more than a century. Various factors have conspired together to ensure that the public perception of colour photography is that it is a relatively recent invention, certainly within the last half century or so.

Over the past twenty years I have been collecting original colour transparencies and my latest book, Vintage London: The Capital in Colour1910-60, draws on that source to illustrate, in mostly unpublished images, London from before World War One through to the end of the 1950s. A London that has vanished into that country where they did things differently – the past.

The most recent images in the book were taken almost 55 years ago and the oldest way beyond living memory.

The 1920s and earlier have been an era that has almost never been captured in colour. A few images are known but a large collection of Autochromes came to the market last year and I was fortunate enough to obtain them. Amongst which were a number of colour images of London taken in 1928, a few of which are included in the book. These show a city that the Victorians would have known.

As far as I am aware this is the first book to illustrate London in the half century from 1910 to 1960 in colour, a city seen through the eyes of photographers who put colour film into their cameras when it was tremendously expensive to do so and who had the foresight to allow us a glimpse into the past that our fathers, grandfathers and in some very rare cases great grandfathers knew.
Posted by GavinW at 19:42 No comments: 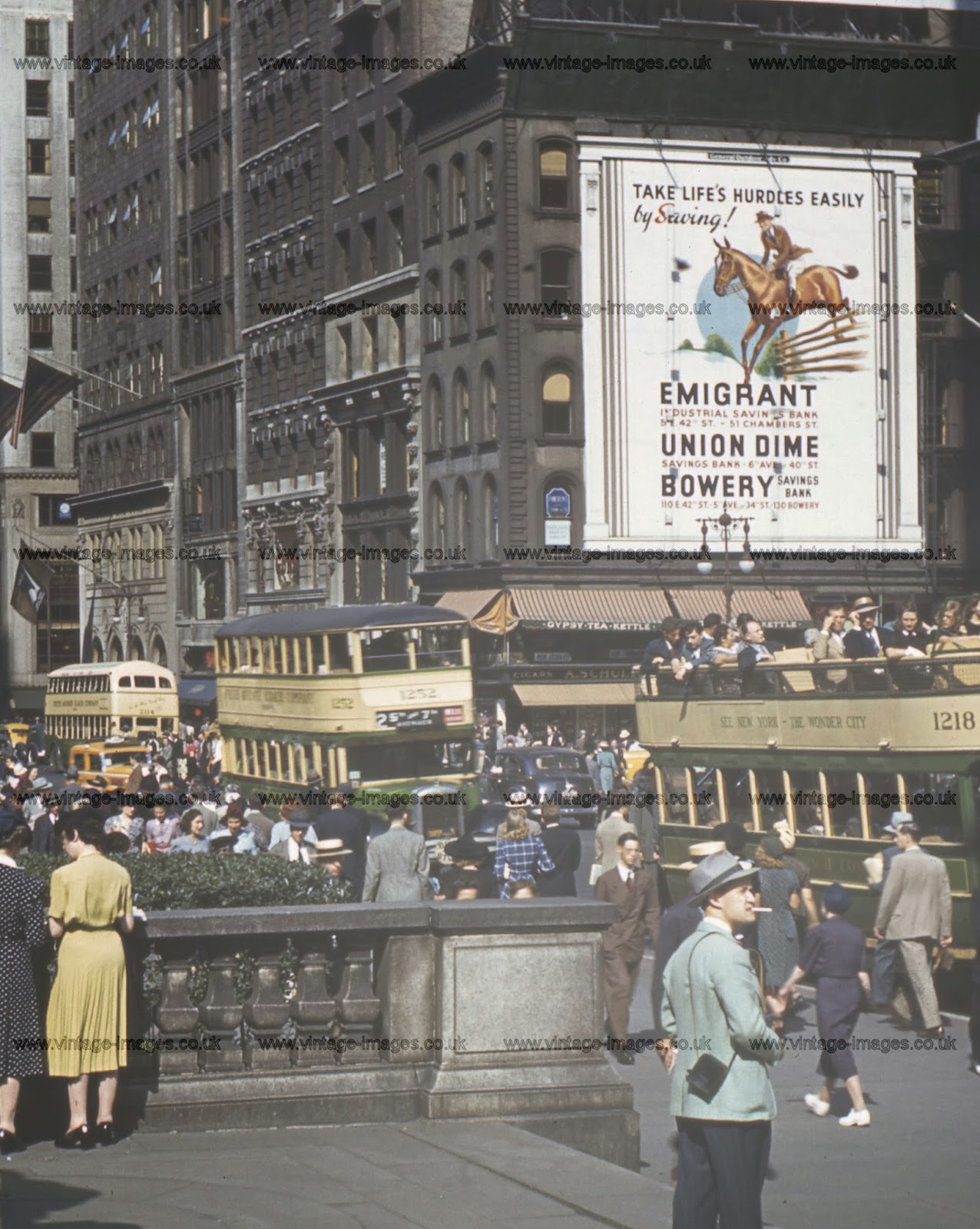 New York on the verge of World War 2. 5th Avenue positively heaves with traffic in this view from 1940.  Taken from the steps of the New York Public Library, the third largest public library in the World behind the Library of Congress  and largest, the British Library.

The bus in the foreground from the Fifth Avenue Coach Company extolls visitors to "See New York - The Wonder City". Three of the companies' vehicles are in view with the next vehicle (possibly a 1931 model, as the company built their own coaches as well as running the routes) on route 2 from Washington Heights to Madison Square. The company went through various sales of parts of the business from 1954 and following a labour and financial troubles the company itself was absorbed into the cities transport system in 1962.

If you look closely at the building in the middle of the picture you can see a branch of the  Gypsy Tea Kettle resturant chain (air-cooled, definitely required in the heat of a New York summer), where you could get your fortune told. This branch opened in 1931. After you had drunk your tea the tea leaves would be read. The chain finally closed around the turn of the millenium.

New York in the Summer of 1940. With just over a year to go before World War 2 this would be the penultimate summer of peace. 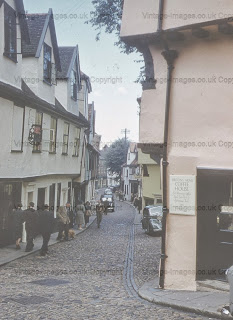 Elm Hill, Norwich. Partly threatened with demolition in the 1920s it is now one of the more picturesque areas of the City with buildings dating back as far as the early 16th Century. The area dates back much further, possibly to the 1200s, but a fire in 1507 devastated the area and almost nothing survives from before the fire. The Britons Arms, the pink building in the foreground may predate the fire as it stands a little away from other buildings. The Britons Arms Coffee House (open for Morning Coffee, Light Lunches and Afternoon Teas) is still trading. The vehicles and fashions may have changed, but tourists still like their morning coffee and afternoon tea.
Posted by GavinW at 13:13 No comments: 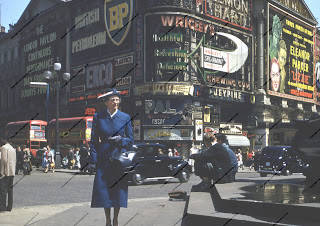 Piccadilly Circus, one of the "must have" photo opportunities for tourists in London. Seen here in 1957 with a very well dressed American tourist posing for the camera. Something outwith the shot seems to have grabbed her attention, but not her approbation judging by the severe look on her face!

The Pavillion, is no longer festooned with advertising as seen here. Piccadilly Circus only has one building covered with adverts now, and these are electronic with light emitting diodes now rather than neon filled glass tubes and it is all rather clinical. In 1957 it was a blaze of lights and one of the sights of London at night when it was a riot of colour.

Some of the adverts here are still household names and some have long gone.

British Petroleum is still one of the largest oil companies but Ekco - the television and radio manufacturer - has gone and is now merged as part of Phillips Electrical Industries. You can no longer buy Pal Injecto-matic Razors, a product of the American Razor Company, nor can you purchase Miraglo lighting window cleaner which perhaps was not as good as its adverising led one to believe.

Colibri lighters are still manufactured, although the monopol is no longer in the range available today.

Wrigley's is still one of the leading brands of chewing gum, although originally the company made baking powder and chewing gum was offered initially free with each packet. However the gum became more popular than the powder and Wrigley's then concentrated on gum manufacture.

Lemon Hart Rum, now billed as "100% Demerara -The World's Most Flavourful Rum" has been around as a blend since 1804 and the company can trace its origins back even further to 1720.

Jeypine is still used for hospital disinfecting and is available in the Far East but does not appear to be available in Britain although the Jeyes group still sells Jeyes fluid here.

At the Pavillion, a cinema which closed in 1986, Eleanor Parker stars in Lizzie, a drama filmed in black and white. The film is shown as a continuous performance, so that if you walked in half way through one showing you could stay and watch the first half after you had watched the second half - confusing when it was a drama or a mystery film!
The cinema was gutted after closure and has undergone several metamorphoses since and is now the Trocadero entertainment centre with, ironically a seven screen cinema as part of the complex. The facade of the Trocadero is now bereft of illuminated adverts.

The scene below is of Piccadilly Circus from Regent Street at night around 1961 with the Regent Street Christmas decorations adding to the light show. 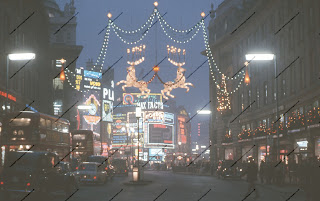